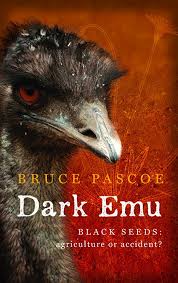 The story I always got as a schoolkid was that the First Australians were simple hunter gatherers and nomads. We were told that aboriginal people created no permanent dwellings, that they didn’t bother to cultivate the land, that they didn’t have the technology to build dams nor to herd wild animals.

But it turns out that all of this just isn’t true.

I am just reading Bruce Pascoe’s book Dark Emu which completely dispels this myth, a myth that was clearly promulgated by the first settlers in order to justify the theft of land from traditional landowners.

By reading some of the original white explorer’s diaries Bruce has uncovered 100s of examples of first australian animal husbandry, agriculture, cereal production and storeage, well building and permanent settlements.

For example Sturt’s group were within 2 days of dying of starvation and thirst in the middle of the Stony Desert, when they were greeted by a group of 400 Aboriginals who offered them farmed roast duck, cakes made from millet and three newly constructed buildings for their use while they recovered to continue their journey.

Sturt and many other explorers documented all of this in great detail, including large scale harvests and driving through 9 miles of haystacks !

Archeologists have recently accepted that the oldest man made stone structures discovered to date on the planet are the 40,000 year old stone fish traps at Brewarrina, and 32,000 year old grindstones meaning the First Australians were the first bakers in the world !!

Like Bruce I find  it incredible that this culture is so underestimated in Australia. As he says if this was in Texas or Britain there would a Tourist bus running to the site every 15 minutes !

Listen to his interviews on ABC radio here and here 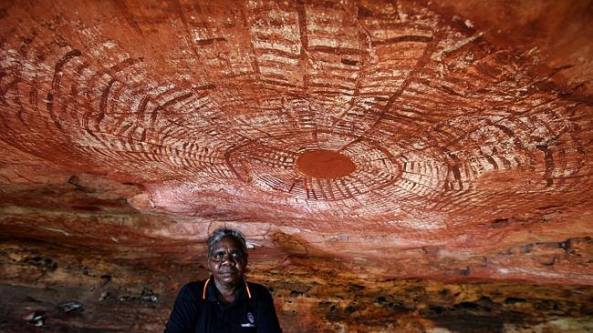 This is one of the oldest mandala like images in the world, possibly created around 50 000 years ago with the Kimberly Foundation Australia dating project still testing to confirm dates … it is painted in ochre on the ceiling at Cyclone Cave, in the Kimberley, Australia. Robyn Mungulu, senior guide stands here and shares the sacred site.
Image: Colin Murty