Arrived at my daughter’s property Tuesday armed with mozzie repellant and nagging doubts about the pack of wild dingos she explained were roaming the area attacking the animals. They had completely decimated her chicken coop over the last few weeks, attacked the horses and dogs and savaged her latest pet, Piggy the wild boar. The goat fence around the van where my daughter has lived for the past 2 years was no deterrent apparently.

Tach had mentioned a few times that she had built me a “little shack” at the top of the hill and tried to assure me that I would be perfectly safe up there as “you’ll see the dingos coming for miles…”. Imagine my surprise when she showed me the “shack”

She has built a 3 bed fully fly-screened mansion, totally solar powered with 270 degree views over the Barron River Valley and beyond.

At last one of the family has forsaken their hippy past !

Access is problematic, however, in the wet season. There are 8 (yes EIGHT!) creeks to cross to get to the property.

During the big wet even 4WDs can’t get through so vehicles are left on the bitumen some 3km away and Tach and Dennis use a canoe to get to work. Sometimes even this gets too dangerous so they have to take a 8 km detour, walking over the railway bridge (built circa 1920). 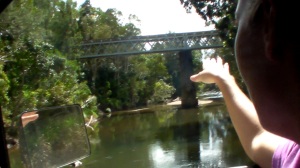 This year the water rose to within 1 meter of the bottom of the bridge…..

Yesterday we went for a tour of the property boundaries to inspect the fencing on the Quad bikes and it took over 2 hours. 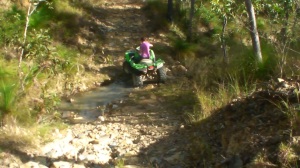 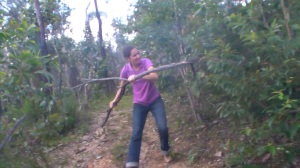 Anyway, the ideal writer’s retreat. Lots of toys and animals to keep me amused during those writer’s block moments.

Looking forward to spending the next month here, focusing on Book 2 “Kalimantan”.