The drive to the office this morning took a little longer than normal as thousands of Balinese flooded on to the streets making final preparations for Nyepi.

Bali time is normally a pretty flexible concept , but as the deadline for completing the construction of the 30,000+ Ogoh-Ogoh statues around the Island draws near, some obvious signs of sleeplessness were evident : 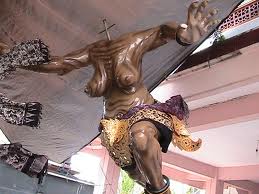 Headless statues were being attended to by groups of raucous teenagers, with an application to detail that would put the western Y Generation to shame.

On the beach at Petitenget the other night we stumbled across one of the more obscure rituals which involves 2 very life like Giants performing a story from the ancient scriptures surrounded by hundreds of chanting devotees all dressed in white. We stood and watched for over an hour and could still not work out how these puppets had been made so realistic – almost convincing ourselves that they were in fact genuine giants.

Rituals abound, but cameras are not welcome at some of the more gruesome ones so I borrowed this stock footage picture to give my readers a feel for the vibe here.

On my way home tonight every village was shut down to traffic as the whole population gathered to pray – only us motorcyclists could get through often driving through rice paddies to avoid the jam. 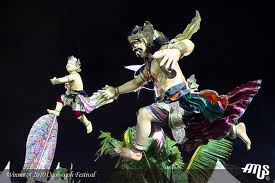 This is last year’s prize winner in Denpasar.

Tonight we will be in Ubud, the cultural centre of Bali, to witness over 100 Ogoh Ogoh’s being paraded through the streets, many of which have been under construction for months, only to be ritually burned and dumped in a large pit.

Tomorrow is the Day of Silence – no one is allowed out in the streets, no traffic, all flights are stopped and total silence reigns the island, strictly enforced by the elegantly dressed Temple Police.

Happy Nyepi to all friends around the world – I will report back on Wednesday hopefully with some spectacular footage of tonight’s events !